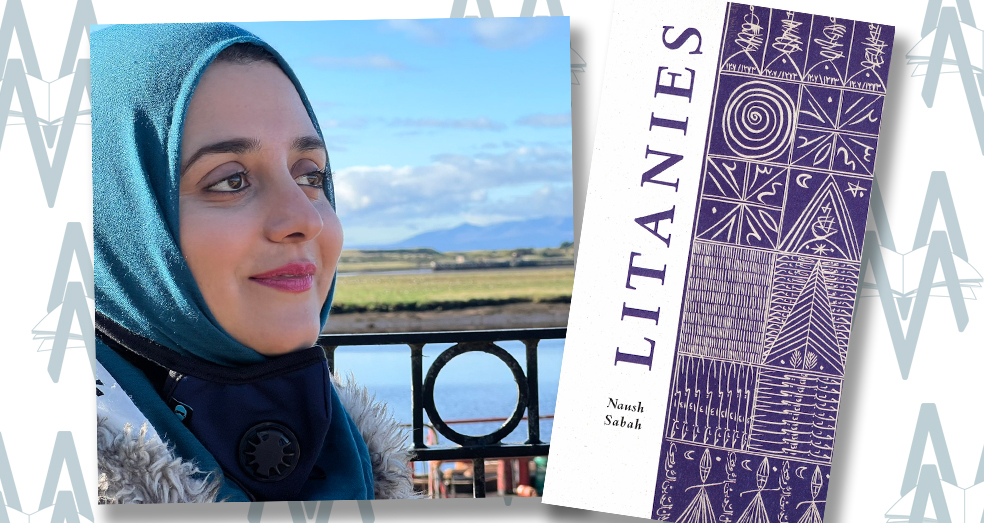 There’s a clue in the title: a litany is a shared petition to God, a call and response, so to speak, so we know from the beginning that this pamphlet intends to involve us all. These are feisty, outraged and outrageous poems, tracing a woman’s path through spiritual uncertainty. The poems are enriched with Arabic and Sufi text to remind us that sometimes the English language alone cannot be sufficient. We were struck by the sheer boldness of the narrative – it’s deliberately confrontational stance, addressing colonial exploitation, anthropocentric religion, the role of women in Islam, and the uncomfortable balance of visceral and spiritual desires. Above all, it was the sheer beauty of the language and the skill with which the individual poems were crafted which impressed us so much. These stunning, apostatic odes bear an importance which will endure far beyond the confines of the pamphlet that holds them.

Before Bebo can speak or stand

the call to prayer is raised;

her skin, paper-thin, rolls and folds

when father whispers with head bowed:

‘Before your death, you should prostrate.’

The world teaches her to kneel.

Soon she paws at things, crawls and kneels,

stretches arms out to where he stands,

starts to mimic when he prostrates;

climbing upon his back, she’s raised

to be a thread within the fold.

And as a child it’s fun to fold

those dazzling clothes, get down and kneel

for hands of henna, hair in bows,

and wait for the ehlan, then stand

as rice cooks and laughter raises

At night her secrets fold

into her quiet, no one to raise

her spirits; she’ll turn to God and kneel.

in tahajjud keeping her head bowed.

With womanhood her faith begins to bow

before fiqhi flaws and prostrate

minds that refuse to think or stand

against doubt she’s been taught to fold

up inside and ignore. ‘We kneel.

God is Most High so don’t raise

objections. He can hew those He’s raised.’

Now a mother, she commits and bows,

devotes herself, again she kneels

to seek kashf so doubt prostrates

to need and allows her into the fold

where saintly souls and prophets stand.

now her daughter prostrates and kneels